skip to main | skip to sidebar

http://www.pushinthebay.com - The Coachella festival is a place where minds routinely get blown, usually due to an awesome set or a killer reunion from one of your favorite bands. But on Sunday night it was thanks to the ghostly re-appearance of West Coast rap legend Tupac Shakur. He materialized on stage alongside his old friend Snoop Dogg during a crowd-pleasing set by the Doggfather and Dr. Dre, which also featured appearances from Eminem, 50 Cent, Wiz Khalifa and Warren G.

The resurrection of 'Pac, who was murdered in 1996, would have been a face-melting surprise had word about the stunt not leaked out just a few days before the set. But the 100,000 or so fans who were on hand still couldn't believe it when Tupac materialized on stage to rip off "2 of Amerikaz Most Wanted."

"What up, Coachella?" the shirtless, pants sagging MC asked the crowd before bouncing into the classic single "Hail Mary."

"We worked with Dr. Dre on this and it was Dre's vision to bring this back to life," said Nick Smith, president of AV Concepts, the San Diego company that projected and staged the hologram. "It was his idea from the very beginning and we worked with him and his camp to utilize the technology to make it come to life."

YouTube video produced by Shaun Tai for SHAUN TAI Films, shaun@shauntaifilms.com.
Posted by Emcee T at 9:34 AM No comments: 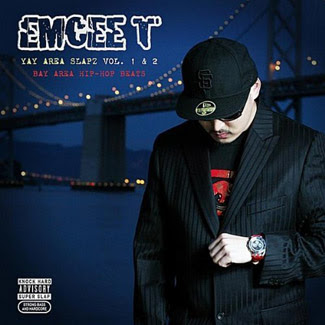 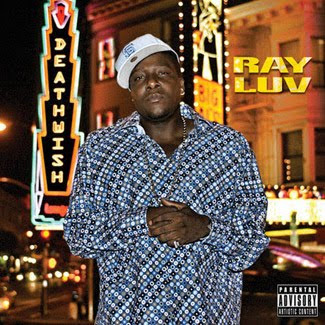 Download on iTunes NOW!
Posted by Emcee T at 12:03 PM No comments:

PUSHIN' THE BAY RADIO on THE SLY SHOW!

The Sly Show Cordially announces that they have signed Emcee T, Ray Luv & the Pushin' The Bay Staff to switch up gears and begin a radio-show on “The Sly Show" every Wednesday at 4 P.M and replayed Sundays plus a podcast of each show available for download.
PUSHIN' THE BAY “is the most informative, up to date, and entertaining resource for classic Bay Area hip-hop. Founded by artist/entrepreneur Emcee T in 2006 PTBTV has consistently delivered thought provoking and retrospective interviews with veteran Bay Area artists, as well as rare insight to and behind the scene footage of legends such as Tupac Shakur and The Notorious B.I.G."
Pushin’ The Bay Radio (PTBR) will be hosted by Emcee T and Ray Luv. Emcee T is one of the most sought after journalists in the Bay Area and a veteran in the entertainment scene. The combination of T and Ray Luv, a Bay Area rap icon, helped PTBTV achieve millions of views on their YouTube channel and thousands more on Channel 26 (1st and 3rd Fridays in the East Bay) with their Show “Pushin’ The Bay TV."
Ray Luv, who some of you may remember performing and writing for 2Pac in the early days in a group called " Strictly Dope", was also part of the legendary record label Strictly Business & Young Black Brotha where he worked closely with bay area producer Khayree and the late Mac Dre.
Pushin’ The Bay Radio intends to give you the real sh*t, "street level radio" Ray Luv explains.
"I've always been a fan of the authentic. When I started Pushin' The Bay TV in 2006, I focused my efforts on giving back... and that is what Sly does, give his listeners what they want (to hear)," Emcee T explains after being approached by numerous other radio stations to start a radio-show similar to their TV gig.
No secret that in the San Francisco Bay Area, Emcee T & Ray Luv are responsible for a lot of buzz generated and the newly formed partnership with The Sly Show will take this region to a whole another level.
"Sly is crazy as f-. People judge. But to truly 'push' an area, you need to push with people who have the same heart and passion for their field. That's why (Pushin' The Bay) partnered with The Sly Show - you can't deny Sly's love for radio," Emcee T explains.
List of Notable Guests on their TV Show: A- Z
Alison Becker (VH1 / MTV), Andrea Lowell (Playboy / Surreal Life), AP .9, Black C (RBL Posse), Busta Rhymes, Chamillionaire, Digital Underground, Dru Down, Good Charlotte, J-Diggs, Guce, JT the Bigga Figga, Laroo, Leila Steinberg, Mac Dre, Mac Mall, Marcus Allen, Marshall Faulk, MC Hammer, Mistah F.A.B., Mopreme Shakur, Rydah J. Klyde, San Quinn, Snoop Dogg, Spice 1, Spliff Star, Warren Sapp, and Young Dre.
“I’m honored that Emcee T & Ray Luv chose The Sly Show because they are veterans in the game… and it’s the best fit. We kill shit on radio; they kill shit with the visuals. It was bound to happen sooner or later,” Sly Explains.
Emcee T stresses "Nothing will be watered down... and we expect feedback (from the public).”
So give them feedback! Follow Emcee T & Ray Luv on Twitter: @emceet and @therealrayluv
Catch Pushin The Bay Radio LIVE on “The Sly Show" every Wednesday from 4 PM - 7 PM and Sundays from 1 PM - 4 PM. exclusively done all the way @ http://www.theslyshow.com
Posted by Emcee T at 12:01 PM No comments: 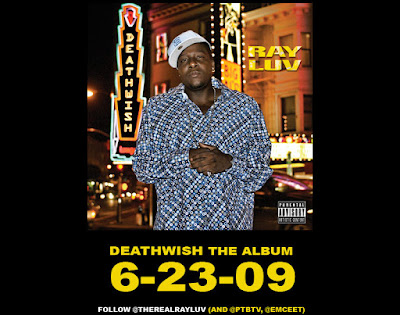 Purchase Ray Luv's "DEATHWISH" the album for $9.99 with a personalized autograph and FREE shipping!

Go to http://www.rayluv.com/ for more details.
Posted by LP.hotography at 12:25 AM No comments: 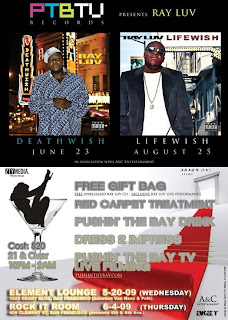 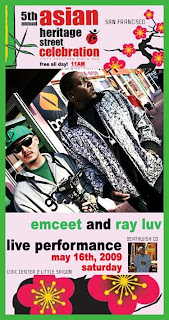 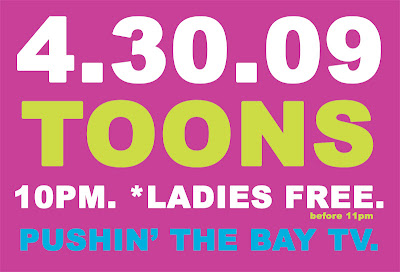 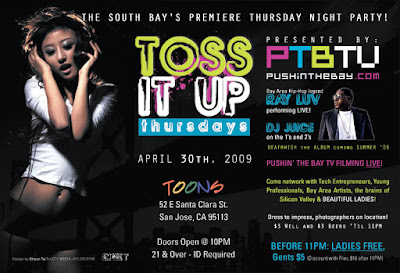 PUSHIN' THE BAY TV presents 'Toss It Up Thursdays' at Toons Nightclub with Bay Area Hip-Hop Legend Ray Luv and the Bay's #1 Dj, DJ Juice.
Come hear unreleased tracks from Ray Luv's new Album, 'Deathwish' and network with young professionals and Bay Area artists. A great party to mingle, get down, listen to good music, and network!
Dress to impress. Photographer on location and PTBTV will be in the house filming LIVE!
When:
Thursday, April 30, 2009
Where:
Toons Nightclub
52 E. Santa Clara St.
San Jose, CA
Before 11PM: Ladies FREE, Gents - $5
Drink specials before 11PM -$3 Well drinks & $3 Beers.
Doors open at 10PM
21 & Over - ID Required
For more info contact: pushinthebay@gmail.com
Did we forget to mention LADIES IN FREE before 11PM?
Posted by LP.hotography at 12:44 AM No comments: 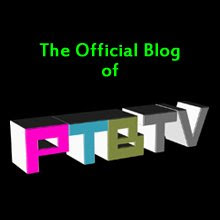 PUSHIN' THE BAY TV (PTBTV) is the most informative, up to date, and entertaining resource for classic Bay Area hip-hop. Founded by artist/entrepreneur Emcee T in 2006 PTBTV has consistently delivered thought provoking and retrospective interviews with veteran Bay Area artists, as well as rare insight to and behind the scene footage of legends such as Tupac Shakur and The Notorious B.I.G.

T embarked on his journey to PUSH THE BAY upon realizing the importance of creating opportunities for fellow independent artists. This idea to PUSH THE BAY manifested into a concert series/artist showcase called PUSHIN' THE BAY as well as PTBTV.

Co-host and veteran Bay Area MC Ray Luv lends his experience and position in the formative stages of the Bay Area rap scene to PTBTV. Unlike other shows PTBTV features a host who draws from direct experience in relation to the shows mission as well as with its interview subjects.

Ironically it was Luvs work that brought T into the world of hip-hop. Their collaboration has brought balance to the objective of PTBTV, showcasing the contributions and innovations made by Bay Area rap pioneers. As Luv serves as a representative of PTBTV to the music industry, T provides the shows technical savviness.

It took two minds to get this vision moving full force. Him a 90s Bay Area rapper from my hometown and me a Chinese-American in love with Bay Area rap music from the 90s said T. Together these two will push the Bay to unprecedented heights.

Which is your favorite PTBTV interview?